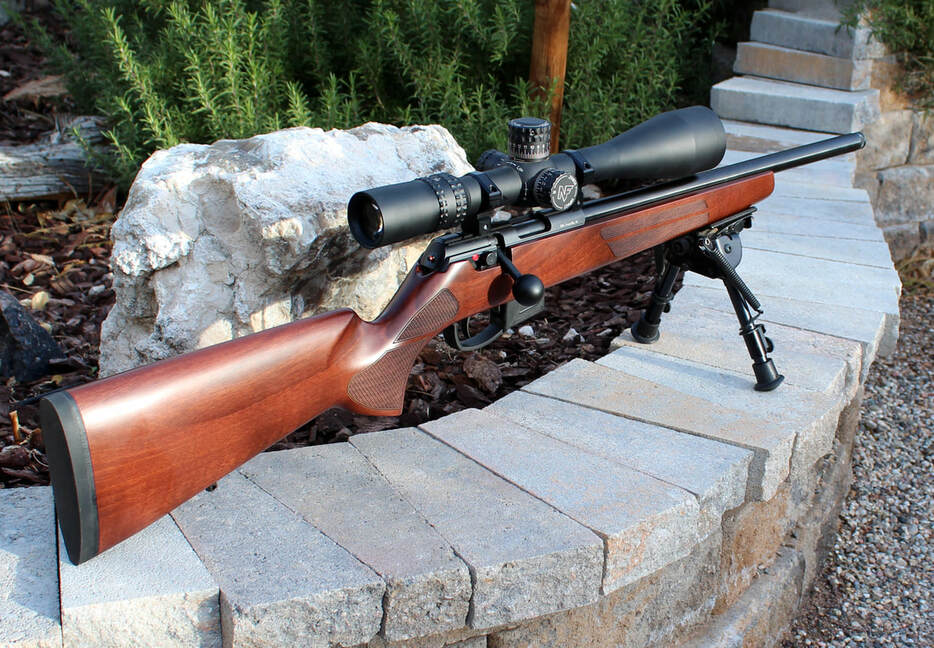 With nearly three years of development, the new 1761 is our next generation of bolt-action sporting rifle from ANSCHÜTZ factory in Ulm, Germany.  The 1761 is designed with the sporting shooter and hunter in mind, functioning as a magazine fed bolt-action repeating rifle chambered in .22lr, .22 WMR, and .17 HMR.

While this style follows our long tradition of refined sporting and hunting rifles, there is very little similarity between the new 1761 and our current line of 64 and 54 rimfire rifles.

The following information offers a closer look at the unique aspects of our 1761 rifle, the mechanical operation, and improvements over the current designs, along with some of the how and why behind the new rifle. 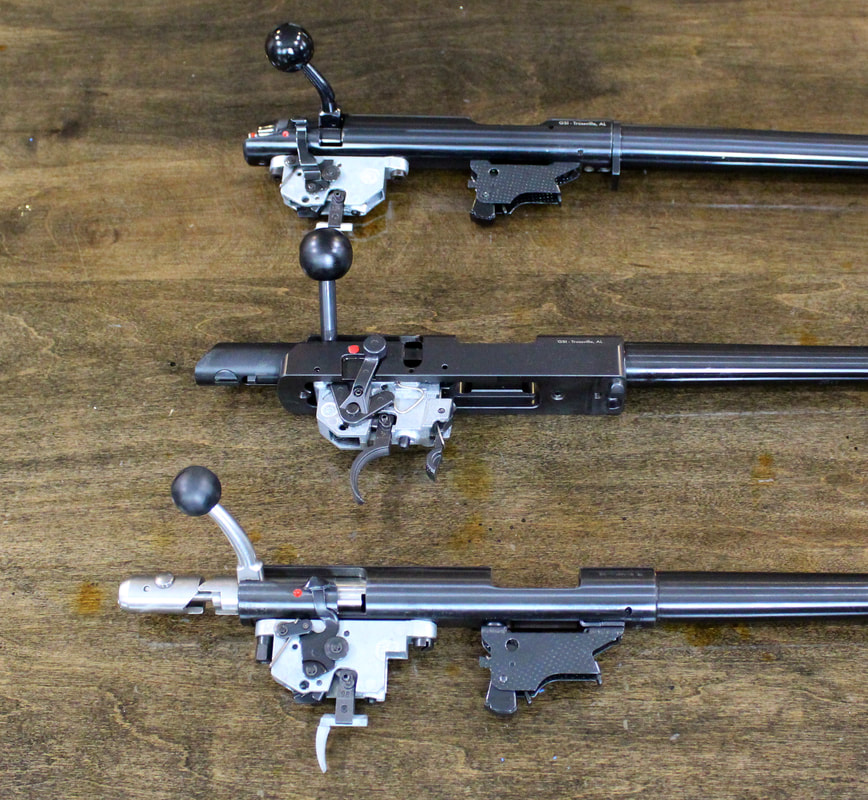 From the very start of this project we knew a significant change was long overdue for our line of sporting rifles, so we set out to change not only the mechanical operation of the rifle, but to also update the overall appearance.

There already existed a short list of ideas with the design team in Germany, so when it came time to start on the project, the design team broke down all the aspects of the current match 54 sporting rifle ( 1712 / 1710 series ) to identify what we wanted to change in relation to these new ideas and what could remain the same.  The purpose was not to replace the 54 sporting rifle, but to offer something substantially different in our line of sporting rifles.

As for the 64 action, which is quickly approaching the end of its life cycle, making any changes or updates to that action was not considered for this project.

The mechanical change which was most pressing resided in the bolt, specifically changing to a smoother operation while maintaining a short bolt lift.  Along with this and nearly sharing the same level of importance, we wanted to change how the barrel was installed into the receiver.

Within the first few months it became apparent that it was not going to be practical to rework the 54 action to achieve these goals, so it was decided to stop reworking what already existed in the 54 action and start fresh with a blank sheet of paper. 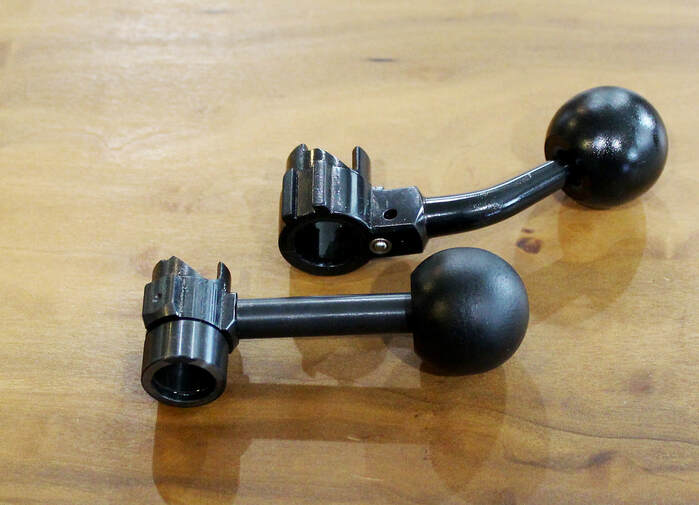 The new bolt design was based on two key elements; ergonomics and reliability.  Looking at the match 54 actions, the very short bolt lift of 53 degrees on the current bolt requires a firm grip to operate, especially when cocking the bolt.  We had a plan as to how we reduce the force required to operate the bolt and make the entire operation much smoother.

Any time you have a short bolt lift, you in turn need to have a steep cam angle to cock the rifle.  Some rifles use a very long bolt lift and shallower cam angles, such as 90 degrees, and while this lessens the force needed to cock the bolt, you have tremendous bolt movement required for operation.  Not only does this greatly disturb the shooter’s position, but is also requires mounting the scope much higher to prevent your hand from contacting the scope body.

Virtually all European target rifles now offer short bolt-lifts and refined ergonomics in their action designs, and it has also been widely accepted by target shooters world-wide as the "new standard."   Precision machining and careful fitting of parts makes this possible, but there is always room for improvement.

To continue with this modern ergonomic trend, we opted to slightly increase the bolt lift from 53 to 60 degrees as a trade-off in order to move the locking lugs from the rear to the middle of the bolt.  The lugs were switched from smaller eccentric lugs to a much more robust set of three lugs, and evenly spaced these around the bolt.  This allowed us to move from a long dual-spring firing pin to a very short, light firing pin and single-spring striker system.  The new spring and striker mechanism was moved to the rear half of the bolt.  This change also made the bolt much shorter in overall length. 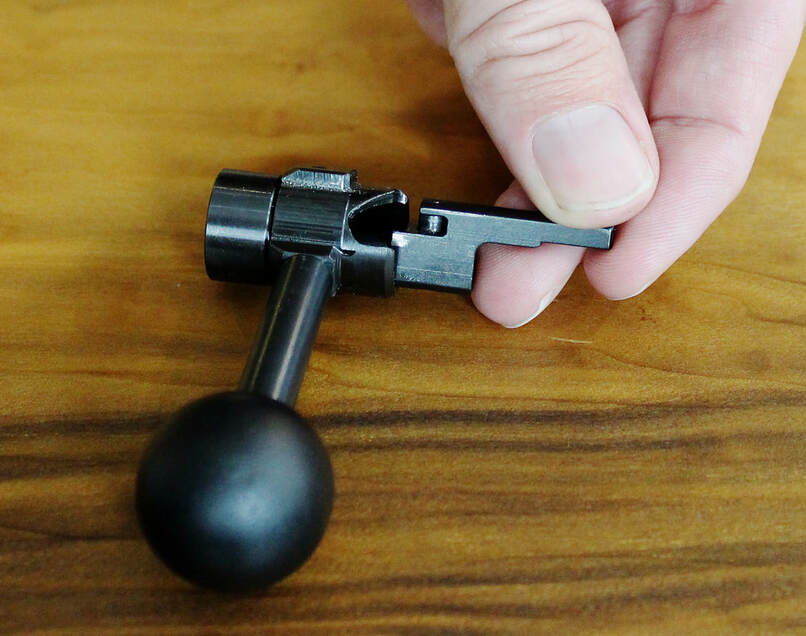 From there we added in a roller-bearing to the new cocking piece which sits in between the firing pin and the striker inside the bolt.

Now when the bolt is cocked, a roller bearing moves smoothly up the steep cocking ramp of the bolt body, greatly reducing the force needed to cock the bolt and also allows for a stronger spring.

With these improvements, the 1761 offers a smooth and short feel when operating the bolt, yet still has a robust firing pin strike on the case head. 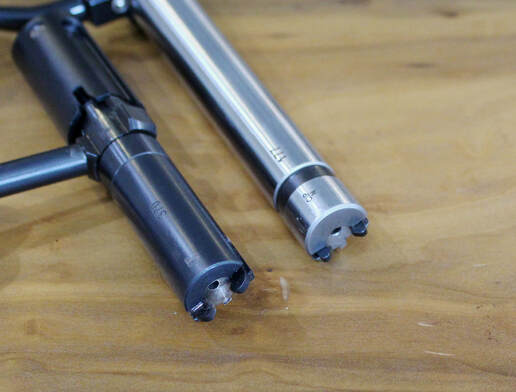 Improving the ejection of spent cases was also at the top of our list to address.  With all the variation in rim thickness between ammunition manufacturers, the current c-spring system has its limitations and requires some time in assembly to tune for optimal function.  We wanted to change the bolt head so the ejection would be more consistent and not require nearly as much hand-tuning time at the factory.

This was not such a big jump because our single-shot match 54 rifles eject quite well, so with a little design change to make that system work in a repeater, we incorporated this extractor and holder setup into the 1761 bolt.  Now rather than a C-Spring and stamped metal holder and extractor set, we moved to a much smaller holder and extractor system operated by internal spring and plunger systems.

We then slightly changed the position of the holder to better kick the spent casings out to the side of the ejection port rather than upwards.  This helped reduce the chance of a case bouncing off a scope and back into the ejection port. 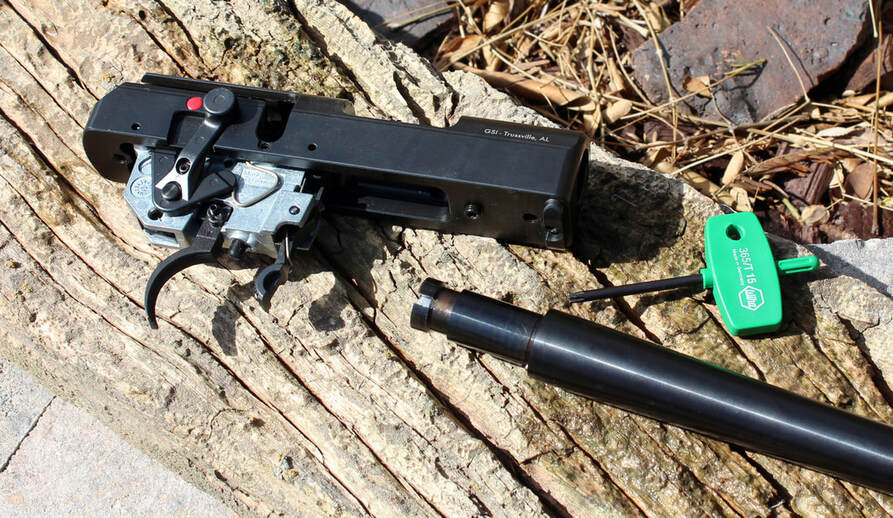 Looking at the 64 and 54 sporting rifles, both of those systems use a “press-fit” style of attachment to secure the barrel to the action.  In a press fit system, the barrel is held in the receiver by friction and secured with locking pins.  This method was chosen many years ago for the advantages of production ease and consistency from rifle to rifle.  The press-fit system allowed for a very precise and repeatable process when installing barrels.

That said, over the past few decades, we noticed some sport rifle shooters changing out their barrel for a unique contour or length specific to their needs in the field, and most found it to be a complicated task without the help of a skilled gunsmith.

We thought on this and felt that an action which would allow the easy removal and re-installation of the barrel would appeal to many shooters who may want a shorter, suppressed barrel for hunting, but then switch to a heavier target barrel for shooting at the range.

To ensure the proper alignment for extractor and holder slots, the barrels have a small pin inserted into the tenon, with a corresponding relief machined into the receiver. 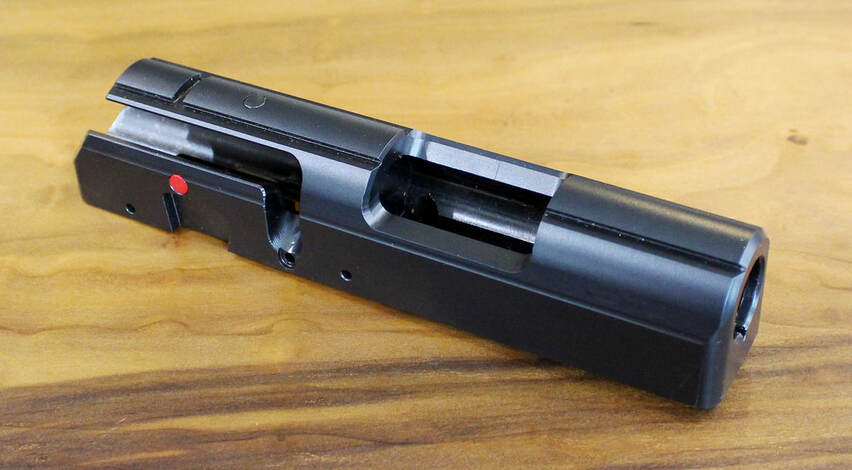 With the bolt and barrel attachment designs figured out, we moved to finish the final shape of the receiver.  In another move away from our traditional models, we decided to go with a flat-bottom receiver made from a solid billet of chromoly and machine with an integral front recoil lug.  With the new bolt design, we were able to shorten the receiver by 40mm when compared to the match 54 receiver.  This resulted in an extremely rigid receiver.

On the top of the action, we chose to keep the 11mm machine dove tail for scope ring mounting, but omitted drilling and tapping 6/48 holes in the top.  As with our single-shot match actions, we found little point in stacking tolerances by screwing on a base and then mounting a scope to the base when you can simply mount a ring directly to the receiver.

On the back of the receiver, we machined in a 3mm cross slot for after-market picatinny rails to lock into position and prevent any movement when mounting large optics or night vision systems.

Some customers have asked if this receiver needs to be epoxy bedded for optimal accuracy, and at this time we have not found any measurable advantage when bedding this receiver.  The large, flat surface area on the bottom of the receiver spreads out the force from the action screws, and the wood stock absorbs vibrations quite well. 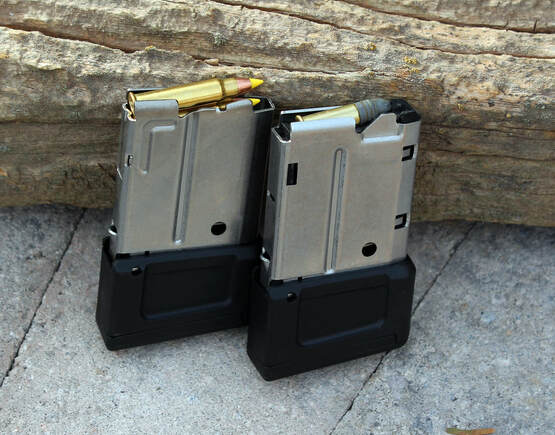 The 1761 uses different magazines for each caliber, but the outside dimensions of all magazines are identical.  In order to allow the end user to easily change caliber in the rifle by simply changing the barrel, we needed to use one magazine body size in order to work with one standard bottom metal and trigger guard unit.

This presented a challenge to make the .22lr rounds to function properly in the same magazine body which holds the 17 HMR ammunition.  To achieve this, we install two polymer inserts in the .22lr magazine to center the rounds in the magazine and also fill up space on either side. 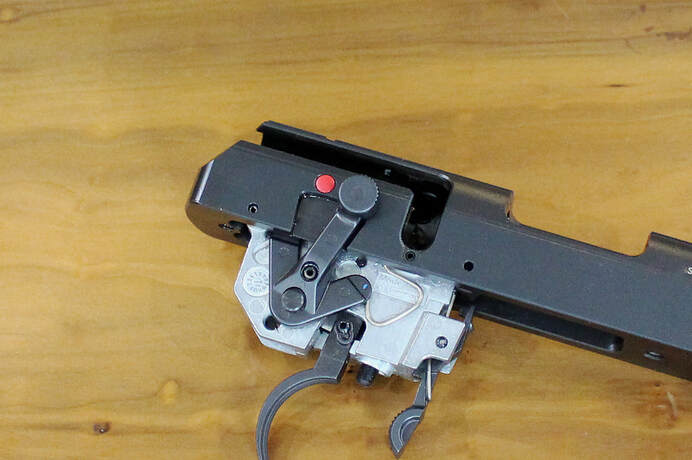 New safety design was technical change we wanted to make.  The internal design of the safety mechanism is very similar to the older trigger system with the safety blocking the release of the catch link in the trigger, but we completely changed the way the operation switch functions.

First we made the surface area much larger for improved grip, and then we greatly reduced the pressure required to operate the switch.  Now the safety can be easily operated, and in hunting situations, it can be operated slowly for a nearly silent function. 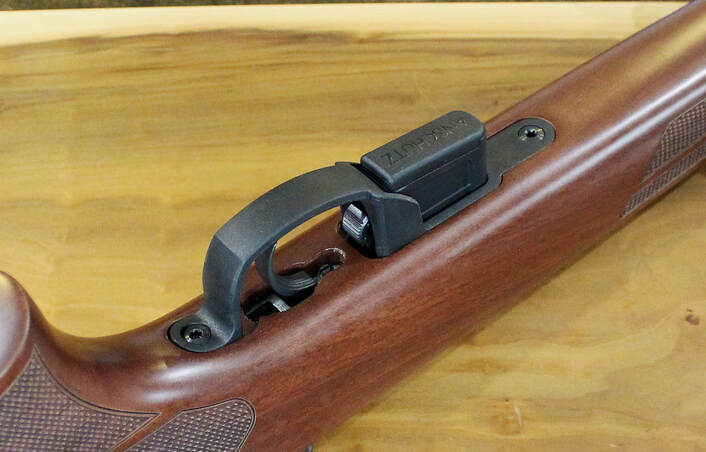 Also completely different on the 1761 is the magazine release latch.  We decided to stay with a pivoting latch to secure the magazine in place, but moved the location of the latch to the inside of the trigger guard, with most of the lever tucked away into the trigger guard itself, exposing only a small radius and textured surface for operation.

The new lever is significantly longer than the older style, giving you much more leverage when releasing the magazine.  Now you can simply move your trigger finger forward to press against the latch and the magazine will drop free from the rifle.
Action Screws

The 1716 is also the first rifle in our product line to use Torx heads on the action screws.  Torx heads on screws offer a more precise fit of the tool head to the screw and longevity due to and more evenly distributed torque transfer.  The two sizes you will need for this rifle are Torx 15 and Torx 20.
Future Plans

This initial release of the new 1761 is focused on offering a flexible and reliable sporting rifle for the field, but it is just the first step of what will become a growing number of accessories and options for this new rifle.  As these new options become available, they will be added to the website and social media with details and pricing.

The most common question we received at the IWA show was about barrel options since the system was designed to facility easy barrel changing.   We will be offering a number barrel variations soon in multiple calibers, featuring different lengths, contours, and threading for muzzle devices.

Currently the rifle features a single-stage trigger adjustable for trigger pull weight and travel, but there are two-stage target triggers in development now.  The first series of rifles will come in a standard walnut classic styles stock, and we are looking forward to offering synthetic stocks, chassis stocks, and a few laminate options.

A higher capacity 10-round magazine for the .22lr is currently in design now, and there are also plans for a larger capacity 17 HMR and 22 WMR magazine as well. 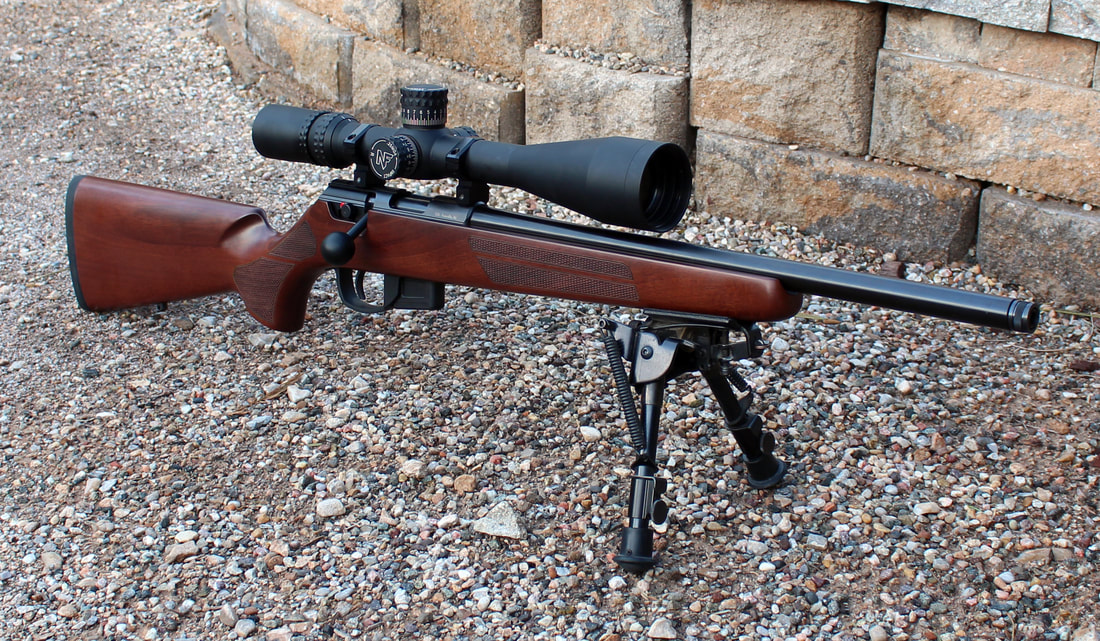